From time to time, any company operating in the modern business environment will have to settle disputes with parties to contracts. The reasons include misconduct and, consequently, failure to fulfill contractual obligations on the part of suppliers, contractors, and other parties.

More than 70% of Enforce projects involve representation of clients’ interests in contractual and tax disputes in arbitration courts. We will arrange for legal examination of the contractual basis, analyze court practices, and formulate a legal opinion to ensure effective defense of your rights. 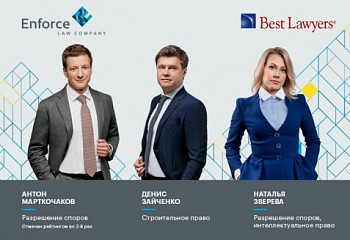 26.06.2018 Best Lawyers ratings: who is the best on the Russian legal market?
Show more